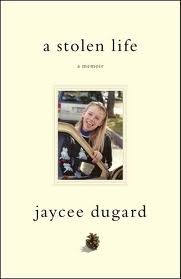 When I first read the news of Jaycee Dugard’s remarkable liberation from her eighteen year captivity, several things went through my mind. I was happy for her and her family, but it was a bittersweet joy as I was left wondering about the long-term effects such an ordeal would have on all the innocent parties involved. I’m probably not the only one who considered whether or not Jaycee had been broken by nearly two decades of suffering at the hands of a maniacal, self-absorbed madman. I’d later receive my answer, first via Jaycee’s ABC News interview with Diane Sawyer, then in her memoir; A Stolen Life.

In some ways I feel A Stolen Life is Jaycee’s valiant stand against the diabolical oppressor who controlled her life since childhood. It is mentioned in her memoir that he didn’t approve of her writing things down, so her brave decision to pen this book is poetic justice and a testament to the integrity of her spirit. With her words, she destroys the smoke and mirrors he’s used to deceive so many people for far too long. Some excerpts make it obvious that the words were emanating from the innocent soul of a young girl whose interests and hobbies mirrored some of my youthful aspirations. Yet other passages contrast her dream-filled entries with seemingly endless dark clouds of injustice.

I’ve seen other reviews referring to Jaycee’s repeated entries about the various pets she kept while in captivity as ‘redundant’ and ‘unimportant’, but on the contrary I believe her furry companions were an important escapism. Caring for pets was the final attachment Jaycee had left of her identity, especially since she was robbed of her own name, among many other things. Having pets gave her some sense of normalcy and I believe it helped preserve her resilience during her eighteen years in hell.

At times, Jaycee’s story was very difficult to read due to the unflinching recounting of the nauseating atrocities Jaycee had to endure. I found myself shedding tears several times while reading of her ordeal. Not only was she held prisoner and forced to learn about life and sexuality through the skewed perception of her vile rapist, but she was forced to give birth—without proper medical care—to two children fathered by him. Still, I reminded myself that though I had the freedom to turn away at anytime, Jaycee wasn’t granted such merciful luxury.

Remarkably, Jaycee managed to keep it all together. She is a true survivor in every sense of the word. Though her mind and body were under tyrannous control, her spirit remained unbroken and determined to protect what she held most dear—her children. The payoff is that there is a happy end to this otherwise tragic story. Upon completing the final page I was left inspired. Even in the midst of darkness, Jaycee was able to find strength and love and used them as a means to survive inconceivable horror and despair.

As some readers have pointed out, the book is often written in simplistic language and is somewhat choppy and rushed in places, but in all fairness, I think the author did well considering her level of education at the time it was written. A Stolen Life may not be for the squeamish, but it’s an intriguing glimpse into the heart, mind and soul of an inspiring survivor who is determined to not only heal herself and her family, but also others who have suffered the pain of abduction.

A Stolen Life is available in print and digital formats at Amazon, Barnes & Noble, and other book retailers.