The CAMILEON saga transcends the scifi/fantasy genre and infuses a seamless blend of paranormal adventure, psychological thriller and romance with a twist of philosophy. This is not a tale of one woman destined to single-handedly save the world from destruction, but the chronicles of a woman with a choice of which direction she will sway what will be the most important battle known to man. As the line between good and evil blurs with the passage of time, her decision becomes increasingly uncertain. 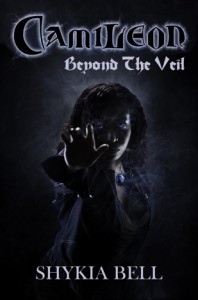 CAMILEON: BEYOND THE VEIL
(Available in paperback and Kindle editions)

As Camile Leon becomes engulfed in the mysteries on the other side of the veil, she learns the astounding truth of its significance to the world’s vitality. Furthermore, she comes closer to understanding her pending role in steering upcoming events to either elevate or destroy humanity as she knows it. As time elapses, the woman in the mirror becomes tinted with a disturbing haze of unfamiliarity. The recent emergence of abdominal scars trigger memories of a past littered with deceit, abuse, seduction and betrayal. This leads Camile to question not only whether she can trust the people appointed to train and assist her, but also her own moral fiber. Doubt is sometimes a paralyzing force, but in Camile’s case, it could result in a cataclysmic chain reaction…

…with humanity in its path.

CAMILEON: Beyond The Veil is available through Amazon!

CAMILEON
(Available in hardcover, paperback and Kindle editions)
Camile Leon is a young woman searching for the hidden truth about her absentee father, a mysterious lost necklace, and the details of her early childhood-none of which she can remember. She persistently digs for the truth, but at each attempt, her mother dodges her questions and swiftly changes the subject. Before her mother is able to reveal the truth, something terrible happens, and Camile fears she will lose her mother forever. She also fears that the details regarding her past will remain unknown.
Just as Camile loses hope on learning the particulars about her past, she makes a shocking discovery which reveals her entire life has been a carefully constructed web of deceit. Almost simultaneously, she experiences strange occurrences that shred the fabric of her reality. She blames these incidents on her extreme stress and hyperactive imagination. As the lies continue to unravel, startling facts emerge-bringing terrible heartache, confusion, and despair.Facing a powerful nemesis, Camile must find the strength within herself to discover the truth. Failing could bring deadly consequences.
CAMILEON is currently available through Amazon and Barnes & Noble.