The Twilight Zone – Most Memorable Episodes

My mother introduced me to this extraordinary series during my childhood. Over the years, many of the episodes have steeped in my mind, forming a richer understanding of the show’s thought-provoking and often philosophical subject matter. The Twilight Zone didn’t just provide great entertainment, it also prompted viewers to contemplate and question social issues and ideals. It helped audiences to ascend to a different dimension of imagination and envision a future unbound by the impossible. For those reasons, I am a huge fan of the series and I have many favorite episodes, but for the sake of brevity, I narrowed down the five I find most memorable (in no particular order). 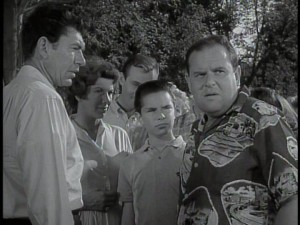 The Monsters Are Due on Maple Street
When a seemingly perfect 1960s neighborhood suddenly loses power after a strange shadow passes overhead, the residents begin to speculate. Tensions rise when it becomes clear that one neighbor’s vehicle has been spared from the outage. This triggers suspicion that the ‘monster’ responsible for the outage is already among them. It doesn’t take much for the residents to turn against each other. Good neighbors quickly become bitter enemies, resulting in a full-blown riot and at least one violent death. I think the following closing narration, like the episode itself, is as applicable today as it ever was.

The tools of conquest do not necessarily come with bombs and explosions and fallout. There are weapons that are simply thoughts, attitudes, prejudices – to be found only in the minds of men. For the record, prejudices can kill…and suspicion can destroy…and a thoughtless frightened search for a scapegoat has a fallout all of its own – for the children…and the children yet unborn. And the pity of it is…that these things cannot be confined…to the Twilight Zone. 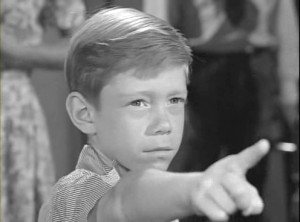 It’s A Good Life
Anthony has a gift. He possesses the power to make his wishes come true. There’s just one problem… He has a strong hatred for anyone who dislikes or criticizes him. Anthony, who I’d imagine would be a perfect playmate for Damien Thorn, is pretty much a dictator in his home. If anyone dares to say or do anything he dislikes he uses his near-omnipotent powers to punish them in horrifying ways. Some disappear. Some are ‘put on fire.’ And others are disfigured. The tragic part is that the people in his life are forced to stifle their true feelings and praise his vile behavior so as not to face a similar fate. The conundrum escalates when the boy’s parents and neighbors are met with an opportunity to put an end to their misery, though doing so would mean becoming monsters themselves.

There are many Anthonys in the world today, both young and old. Though they may not have the ability to wreak havoc via supernatural means, they are just as manipulative and dangerous; especially when they receive encouragement for their bad behavior. 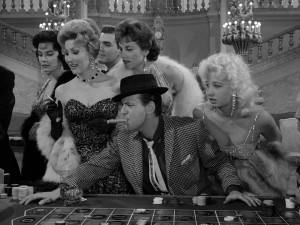 A Nice Place to Visit (1960)
In the case of Larry Blyden, a criminal who met his end in a shootout with police, the afterlife seemingly has everything any guy would want; beautiful women, and a never-ending winning streak at the casino. At first, he soaks it up, but then realizes that winning has no thrill without the risk of losing. Similarly, he sees no point to an afterlife without any danger, especially since he’d grown accustomed to a life full of hazard and unpredictability. He figures heaven just isn’t his scene and he requests to be sent to ‘…the other place,’ to which his guide laughs, ‘This is the other place!’ I was blown away by the twist in this episode. I believe it’s what first introduced me to the notion that heaven and hell are tailor-made for the individual. 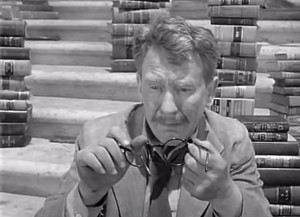 Time Enough at Last
This episode, though extremely well done, is utterly heartbreaking. The main character, Henry Bemis, is constantly berated for most beloved pastime—reading. He is surrounded by people who bear similar anti-intellectual traits as some of the characters in Ray Bradbury’s Fahrenheit 451. Actually, this episode shares several themes with Bradbury’s work, right down to the unaffected wife and a sudden apocalyptic event that wipes everyone Henry knows off the map. The latter leaves Henry alone with enough to sustain his body and mind for years to come. Just when he believes he could survive a life of perpetual solitude as long as he had such a vast collection of books to read, life flips him off one final time and his hopes are irreparably shattered. Every time I watch that final scene, my heart weeps along with him. It’s not fair, indeed, Henry. In fact, it’s pretty damn cruel. 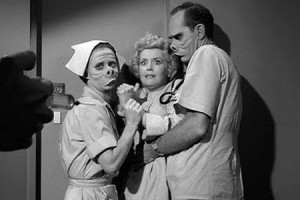 The Eye of the Beholder
How could I not include this classic episode? It’s the favorite of many, and with good reason. Though it’s over a half-century old, it’s still relevant today, perhaps more than ever. So many people go to drastic extremes in an attempt to attain the social standard of beauty. And still, so many people are ridiculed when they fall short of acquiring it. I loved this episode because of the message it sends; that beauty and ugliness are both dependent on one’s perception.

There are a number of other favorites worth mentioning: Nothing in the Dark, To Serve Man, I Am The Night – Color Me Black, The Invaders… I could go on and on, but then this blog would probably never end, so I’ll stop there. Feel free to chime in with your favorite/most memorable episodes.