My Opinion on the Gun Debate

Watching the back-and-forth exchange of the whole gun debate I cringed upon witnessing how nasty people have been treating one another for simply having conflicting opinions. It’s absurd that so many people have the mentality that “I respect your opinion as long as it’s what I want to hear.” It’s okay to disagree with one another, but there are ways to do so respectfully. Sadly, I’ve seen a lot of the contrary. Perhaps that’s why I’ve kept my thoughts to myself until now since I value peace over ugly conflict.

The vicious fear-mongering and name-calling from both sides of the argument has made it clear that there’s a deeper issue beneath the debate itself. There’s been so much talk about gun control and so little about self-control. Not everyone who opposes guns is a frightened sheep and not every legal gun owner is a trigger-happy lunatic. 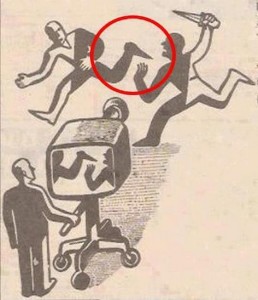 There have been a number of things I have noticed that have been doing more harm than good when it comes to resolving the problems that plague our society. The negative influence of the media is at the top of my list. It has become virtually impossible to find bipartisan coverage on any news event. Therefore, it’s extremely important that the public take it upon themselves to realize that what the news broadcasts has been edited and filtered to some degree.

Recently, I witnessed a young boy’s character being tarnished for the sake of sensationalizing a particular story regarding guns while instilling a sense of hopelessness in the viewers. Here’s a link to the video in case you haven’t seen it.

This greatly disturbed me since by omitting a few lines they presented the child’s intent as criminal as opposed to his desire to work in law enforcement. If a child isn’t safe from the media’s distortion, then who is? Furthermore, how dangerous is it that the public blindly hangs on the media’s every word, not knowing how much of it is truth or propaganda?

The presentation of current events by the news media is often distorted in that the airing of stories about gun violence outweigh those in which crimes were deterred by the presence of the weapon. The recent incident of the Texas college stabbing rampage didn’t receive nearly as much airtime as some of the incidents in which guns were involved. Yet, had there been firearms involved the story I’m sure it would have been continuously aired for days. So, why haven’t we been bombarded with that story as we’ve been the others? Maybe because reporting the incident does nothing to fuel the argument for gun control. I wonder, if all stories of violence, regardless of the medium used, were aired equally, perhaps people might begin to think that maybe there’s a deeper issue. Perhaps, people will get closer to the root of the problem of violence itself and work proactively and collaboratively to find a solution. Perhaps crime will subsequently drop as a result, giving the media fewer crime stories to sensationalize and capitalize on.

Now, I’m sure some people reading this might automatically surmise that I’m against gun regulation and background checks. This couldn’t be further from the truth. I have no problem with the concept of strict gun regulation and I live in New York, which has among the toughest in the country. However, such regulations should be implemented in conjunction with a more progressive education of our society. After all, people are taught to follow rules. It isn’t something that happens innately. And those who are determined to break the law will do so regardless of how much legislation is passed.

The power of choice is greatly underestimated. Not everyone with legal access to a lighter and gasoline becomes an arsonist, just as not everyone who legally owns a firearm becomes a murderer. Also, it has been proven that the internet contains a wealth of knowledge on how to create devastating homemade weapons, yet not everyone with access to the web uses it for that purpose.

Don’t get me wrong, I’m not some disillusioned woman who doesn’t understand the destructive effects of violence. I was barely a teenager when I was first caught in crossfire. In that moment I thought guns were the problem. In that moment I wished all firearms could somehow vanish from the face of the Earth and that all war would be replaced by games of strategy. Yet, as the years have passed I’ve come to understand that an instrument is only as dangerous as the intent behind it. I’ve also come to realize that as peaceful as I wish the world to be, there will always be someone who will be determined to harm others, whether driven by hate or curiosity. Historically, that’s how the world has always been and sadly, there is no undoing the technology that has been developed, we can only do our best to manage what already exists and encourage one another to take a less hostile path when faced with adversity.

In this regard, I think it’s also important to take a look at the current state of our society. Everything has become so fast-paced that the need for instant gratification has all but replaced the concept of manners. People are encouraged to behave outrageously because that’s good business for the media and entertainment world (particularly reality television). Not only that, it seems that now more than ever, people have a tendency to use violence (whether with a firearm or otherwise) as a primary resort. It seems that people have shorter fuses than ever. It’s so easy to tick someone off and people such as internet trolls get off by doing just that.

Society has learned to place a higher value on objects than the feelings and needs of others. Human emotion is a delicate thing, when mishandled or neglected the results can be devastating. Every person has a breaking point and when they reach it, they can either choose to destroy themselves, the person(s) who triggered their pain or both. I’ve been at such a point, but luckily I had the right people in my life to help me see beyond the pain that had blinded me and realize that violence wasn’t the answer. Sadly, this kind of guidance is grossly lacking in our society.

I guess what I’m saying is that we need more patience, open-mindedness, compromise, respect, compassion and empathy in addition to whatever laws are put into place. And even as the government deals with political red tape and partisan discrepancies, there’s no bureaucracy holding us back from expressing these qualities or teaching them to future generations. We all have the power to make a significant change by simply being a little kinder and more respectful to one another while taking advantage of our ability to think for ourselves, not simply believe what we’re told.

Thanks for taking the time to read my opinion. I’m aware that some people may agree and others may not, but that doesn’t mean we can’t respect our differences and try our best to get along.

2 Responses to My Opinion on the Gun Debate