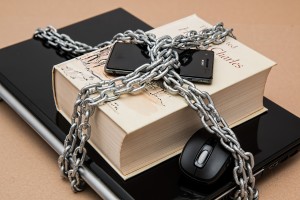 The written word wields remarkable power. It can shape and sway the minds of readers. So, it’s no surprise that every so often comes a time when the powers that be deems a work of literature too taboo for the eyes of society. Usually, such works prompt the reader to reconsider the status quo, be it social, theological or political. They sometimes spark awareness, igniting a public appeal for change. The authors of such literature stuck to their guns and took chances where few others would dare. It’s never an easy thing, voicing one’s opinion in the face of political correctness and imposed propriety, especially when it means going against the grain. On some levels, the same holds true today.

September 27, 2015 through October 3, 2015 marks the 33rd annual Banned Books Week. I’ve put together a brief series in honor of the occasion. Over the next several days I’ll be highlighting five banned/challenged books (in no particular order) that have left a memorable impression in my mind. Today, I’ll begin with a sci-fi classic; Ray Bradbury’s Fahrenheit 451.