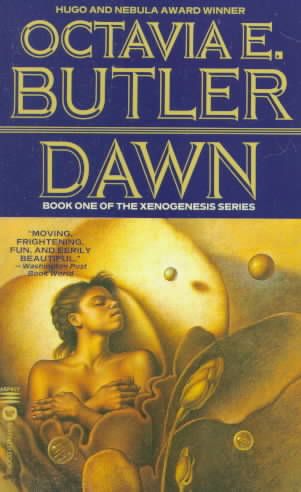 Lilith Iyapo awakens aboard an alien vessel hovering above a post-apocalyptic Earth. She soon discovers that hundreds of years have elapsed since the fiery conclusion of the planet’s final war, which claimed the lives of her husband and son. The aliens, known as the Oankali, rescued humanity from extinction. They solicit Lilith’s help in selecting and awakening others for the purpose of resettling the planet.

However, their survival comes with one condition; in order to return to Earth, the group must surrender their humanity, or at least redefine it.

Dawn—Book One of the Xenogenesis Series, is an intriguing, entertaining and thought-provoking read. Even so, there were a few elements I found hard to digest. The biggest one being that Lilith doesn’t seem to be disturbed when someone she cares about is violated on more than one occasion. In fact, she goes as far as to participate on one of those occasions. Perhaps this was done to further illustrate the fragile nature of humanity when balanced with one’s own desires, mental manipulation and the need for survival. That said, as I was able to empathize and occasionally pity some of the characters and their predicaments—even the alien race, known as the Oankali, to an extent.

Some have complained that Butler presented an overly pessimistic and judgmental view of humanity. Then again, when you factor in all of the elements each character has had to endure in the story, I think it’s safe to say that she was being realistic given humanity’s historical predilection for violence. I’ve seen people react barbarically with far less traumatic triggers than was indicated in the plot. In the case of each of these characters, they’ve had to cope with the psychological burden that comes with the knowledge that their loved ones are gone as is the Earth as they knew it. Tensions mount as personalities clash and the awakened humans struggle to accept that the very woman they view believe is their jailer happens to be their only hope of reclaiming their freedom and returning to their planet. If that wasn’t enough to digest, they’re all under the control of aliens, seeking to genetically modify them whether they like it or not. Yeah, I’m guessing if this were a real-life scenario people wouldn’t exactly sit around and sing camp songs. In a way, the conflict that plays out among the group is a microcosm of the combative behavior that destroyed much of life on Earth. Lilith must persuade the group to cooperate so as to avoid repeating history. By nature, humans have a tendency to rebel, particularly in oppressive situations. That said, I think Ms. Butler remained true to reality in this regard.

When it comes to the fascinating aliens in Butler’s novel, they’re not outwardly villainous or vindictive. In fact, they seem to go to great lengths to ensure the well-being of their human guests. That is not to say they don’t have the potential to apply lethal force if deemed necessary. Are the Oankali genuinely acting out of concern for what’s left of the human race, or are they putting on an act in order to persuade the humans to cooperate with a less than pure agenda? This is a question that circled in my mind often as I navigated each chapter.

Over all, I found Dawn to be an enthralling and thought-provoking read that easily held my interest. I was disturbed by and intrigued by the deprivation and substitution of intimacy and the varying results it had on different characters. Yet, I believe this is the reaction Ms. Butler intended to incite. I believe she wanted the reader to consider whether changing the way we consume and enjoy our basic needs could change the nature of our humanity, itself.

Dawn is among the most unique sci-fi novels I’ve read so far and like many sci-fi novels (and novels in general), it’s best explored with an open mind. Dawn is available in paperback and Kindle editions on Amazon.