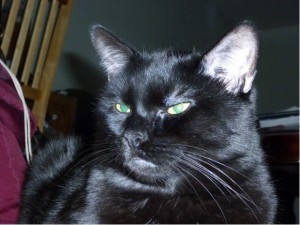 I originally wrote & posted this for my Blogspot account in March 2010.

Five years after my husband, Max, and I got our cat, Bazik (aka Bazilio), we finally came to the point when we could no longer put off having him neutered. The first four years were tolerable, but Bazik’s temper was quickly becoming unmanageable–I have many a scar to prove it. He always preferred to hang out with my husband rather than me, which is probably why we disagreed over the procedure for some time–I was for it, he was against it.

Although I’m 5′ 6″ and…I won’t say how many pounds, it was becoming abundantly clear I was outmatched by this nearly 2-foot, 16-pound feline beast. One day, after enduring a particularly maniacal attack, I vehemently decided that this 4-legged ankle biter had tasted my blood for the last time. After careful research, I found a vet and we headed off to the appointment.

The environment was clean and the staff was professional. Max and I took notice of the prominent sign which stated: PLEASE KEEP YOUR CATS IN THEIR CARRIERS. We half-joked that its placement was the result of prior chaos in the waiting area. When we were called I couldn’t help but feel concerned for the doctor and her assistant since they were both about a foot shorter than me and didn’t have a whole lot of body mass to them. Then I noted there was a 2 to 1 ratio and figured it would even out since the two women had each other for backup. I was surprised at how Bazik allowed the doctor and assistant to place him on the table, pet him and perform the superficial examination without any major fur flying through the air. Perhaps this isn’t going to be as bad as I thought, I figured. Then they brought out the thermometer and proceeded to take his temperature from his second business end. That was the plan, anyway. In a split second, my cat went from the male version of Hello Kitty to the feline equivalent of Cujo. He made it abundantly clear he was not willing to become anyone’s bitch. He lashed out, prompting the veterinary staff to resort to Matrix-style evasion tactics. And, just like that, Bazik quickly dispelled any suspicion I had of him being homosexual. From a safe distance, Max and I attempted to calm him down, but Bazik wasn’t hearing any of that. Seeing that taking his temperature would be impossible without risking life and limb, the doctor decided to skip it. Bazik, however, was still pissed and voiced this fact with a barrage of hisses.

The next part of the checkup was to take a blood sample. I knew that would be an impossible task. I told the doctor: “I think he’ll take your blood before you take his.” She agreed. It was decided to take his blood once he had been knocked out for the procedure. Max and I were told to return in a few hours to pick him up—by then, we were told, the drugs would have mostly worn off.

During this time I felt guilty about the whole thing. Maybe it was the fact my husband and I were dining at an Italian pizza shop while our beloved cat was losing his meatballs. I really love Bazik and didn’t want him to go through such stress, but we were left with no other choice. When we returned to the vet, we noticed the doctor was no longer wearing her hair out. It was tied in a high, messy bun and she looked as though she had been to the gym. The doctor who had performed the procedure was now wearing fresh bandages on his hand that weren’t there when we had left. There were a couple of other pet owners who had come and gone, inquiring about their companion’s behavior, to which the doctor gave answers such as: “She was a little nervous, but did well” and “Oh, he was very well behaved!” When it came time for us, the doctor’s smile faded. In as polite a way as possible, she said Bazik “…was a challenge.”

Finally, he was brought out. As we looked into his carrier we could see he was obviously still loopy as he swayed his head like Stevie Wonder and staggered around like Captain Jack Sparrow. Immediately after Bazik’s recovery, Max and I noticed an immediate change in his behavior.

Two years later, he’s still as active as ever—perhaps even more so—and he now naps on my lap frequently (something that was once unheard of). Every now and then he still eyes my fuzzy slippers, blankets and robes, no doubt reminiscing about the salacious times he used to spend with them. But he still seems puzzled as to why he no longer gets beyond second base.