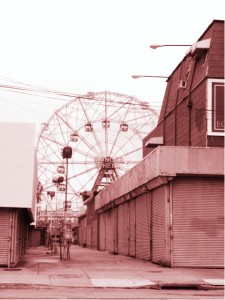 The grimy steel gates are sealed, but he remembers the arcade windows through which a miniature city of lights and frivolity once beckoned him inside. His gaze follows an empty soda bottle as it tumbles down the vacant alley. At the end stands the Wonder Wheel, frozen in time amidst the frolicking ghosts of his childhood. They conjure up memories of the carefree days when he regarded the vast world with kaleidoscopic glasses as he sat upon the shoulder of the rotund steel giant that lived up to its namesake. There was once wonder and possibility as far as his eyes could see. Somehow, the view has dulled over time, becoming almost as gray as the vast sea he once dared to swim. He now finds himself standing atop a growing tower of years, his view obstructed by obligation and circumstance.

For a moment, the salty-sweet scent of cotton candy, popcorn and the crashing waves of the steel ocean seem to swirl around him. He shuts his eyes briefly as time reels him back decades, breaking the chains of logic, responsibility and fear—except that of the gravity-defying rollercoasters. Suddenly, what at one time seemed lost forever glimmered with the hope of restoration. He smiles, realizing that even though his childhood had long closed up for the approaching winter, his heart still beats with all the warmth of those summer days when everything seemed possible.